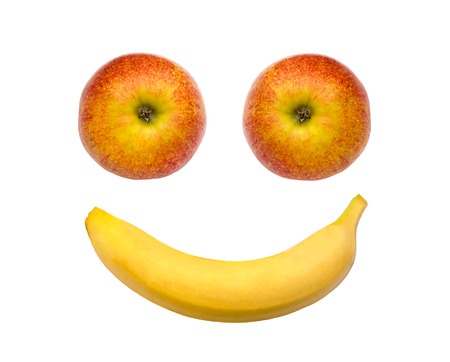 A popular choice if you're looking for a quick snack, apples and bananas are both healthy, tasty, easy and energising.

But which one is the better fruit of choice when hunger strikes?

For the calorie counters among us, an apple might seem like a better choice with around 70 calories in your average apple, compared to over double (around 150 calories) in your average banana. Calories are only one very small part of the puzzle though, so let's take a look at the macronutrient values of the fruits.

If you're watching your fat intake this doesn't really come into play here, with both fruits only containing small amounts. However, if you're trying to increase protein levels then bananas shoot up the scale with 1.8g of protein compared to just 0.5g in an apple. Where the really big differences appear though is in the amount of carbohydrates found in the fruits.

All forms of fruit contain complex carbohydrates, which derive mainly from the naturally occurring sugars. A banana contains 34.8g of carbohydrates, compared to less than half of that amount in an apple (15.7g). This is reflected in both fruits glycemic index scores; apples have a low glycemic score of 39, meaning they have a small impact on blood sugar, whereas bananas have a score of 62, so they make blood sugar rise more quickly.

Both fruits contain an array of vitamins and minerals (although apples have a lot less than a banana) and if you're looking for a boost of potassium then banana's are definitely your friend, they contain 10% of your daily allowance compared to just 3% in an apple.

So which one's better?

If you're looking for a pre-workout snack, a banana is the champion choice as they can provide quick fuel for the body to use whilst you exercise and the extra potassium you get is great for maintaining muscle function.

If you're not hitting the gym but are in need of an antioxidant boost instead then grab an apple. Studies have shown that their high antioxidant level has been linked to a decreased risk of chronic diseases such as cardiovascular disease, cancer, and asthma.