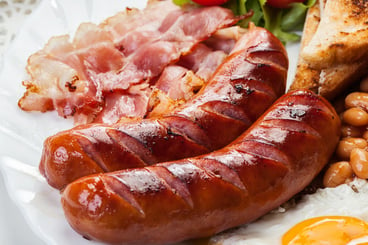 Which wins the battle of the breakfast?

They're both staples of a traditional english breakfast - the perfect weekend treat! However both bacon and sausage are forms of processed meats and should be eaten in moderation - so which one should you opt for?

Both bacon and sausage do well in the protein stakes - in 2 rashers of  bacon* there is on average 16.2g of protein, and in 2 sausages* of 97% pork content there is 22g of protein.

Both bacon and sausage have fairly high levels of fat, bacon comes in at 7.6g per 2 rashers, 2.5g of which are saturated fat, and in 2 sausages there are 18.8g of fat, 9.2g of which are saturated fat. However it's not all doom and gloom - around half of the fat found in bacon is monosaturated, the kind that actually helps reduce your blood pressure and risk of cardiovascular disease.

Although they can be pretty appealing spitting and sizzling in the frying pan, the best way to cook your bacon and sausage is by grilling. Grilling can help drain away excess fat from the outside of the food, as opposed to frying which absorbs the fat.

There are many studies linking processed meat to many different forms of cancer, so if you take away one thing from this article it should be to consider reducing your consumption of both. However many nurtrionists have suggested that as with most things in life, exercising the rule of moderation is a sensible approach to eating processed meats.

As published in The Guardian,  Dr Elizabeth Lund – an independent consultant in nutritional and gastrointestinal health comments:

“A much bigger risk factor is obesity and lack of exercise,” she said. “Overall, I feel that eating meat once a day combined with plenty of fruit, vegetables and cereal fibre, plus exercise and weight control, will allow for a low risk of colorectal cancer and a more balanced diet.”

Prof Ian Johnson, emeritus fellow at the Institute of Food Research, also said the effect was small. “It is certainly very inappropriate to suggest that any adverse effect of bacon and sausages on the risk of bowel cancer is comparable to the dangers of tobacco smoke, which is loaded with known chemical carcinogens and increases the risk of lung cancer in cigarette smokers by around twentyfold.”

Overall, bacon is lower in calories and saturated fat and by trimming visible fat you can lower this again, so from a nutritional stand bacon wins. However, as discussed all processed meats should be eaten in moderation due to their links to cancer.

- Always opt for sausages with a high meat content

- Consider switching to chicken sausages or turkey bacon for a leaner breakfast choice (but be prepared for a less jucier breakfast experience!)

- Always grill rather than frying