What's So Super About Superfoods? 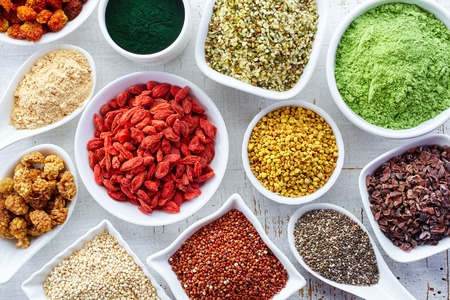 Superfoods are everywhere. On television, in magazines and on the internet - it's hard to avoid them and their supposed body and brain boosting benefits. But how super really are superfoods?

There's never been a trendier time to pop a few superfoods in your trolley and with claims that goji berries boost your immune system, chia seeds help prevent heart disease, coconut oil can help you burn fat and kale can stop you getting cancer - who could blame you?

What is a Superfood?

The Oxford Dictionary definition of a superfood is:

A nutrient-rich food considered to be especially beneficial for health and well-being.

The History of Superfoods

Contrary to popular belief, superfoods aren't a new thing. The origins of exceptionally healthy foods date all the way back to ancient Egyptian times, when labourers would eat garlic due to its ability to create physical strength and stamina. Similarly garlic was said to be consumed by Greek athletes before competing in the earliest Olympics, and in ancient China was prescribed to people suffering from depression and digestive complaints.

Although 2013 was deemed the "International Year of Quinoa", it's actually been grown in the Andes Mountains for the past 5,000 years. Considered so sacred by the Incas, it was offered to the Gods and considered a staple in the diets of the Inca army to fuel them through long marches.

Putting Superfoods To The Test

We've taken a look at some of the most popular superfoods on the market to see what the science says:

Said to boost immunity and brain activity as well as protecting against heart disease and cancer, goji berries are also reported to have sky-high levels of vitamin C. However according to vitamins.lovetoknow.com, it's impossible to tell just how much vitamin c is in your pack of dried goji berries, with levels ranging between 32% of your RDA and 100%+.

The NHS website also reports that whilst there is evidence to support the link between the consumption of goji berries and improved brain activity and immunity and a lowered chance of cardiovascular disease, the experiments lack authority.  This is because they use concentrated, highly purified forms of goji berries which are not reflective of the kind of goji berries sold in the supermarkets.

Coconut water has had a pretty rapid rise to superfood status. It seemed like overnight something only seen on your friends photos of their exotic getaway was available to buy in your local Tesco. As an alternative to other soft drinks such as juices or fizzy drinks, it's a good choice - it has more potassium than a banana, low amounts of sugar and calories. It's naturally occurring electrolytes (potassium and sodium) also make it a good candidate for a sports drink replacement to help you stay hydrated after a workout. The downside? At £3.50 per litre, it's pretty pricey so unless you are an elite athlete needing advanced rehydration, water may be a more cost effective option for you.

A 30ml shot of wheatgrass claims to have as many nutrients as 1kg of vegetables. Sounds pretty appealing for people who aren't too keen on fruit and veg and want to fast track their way to their 5 a day - right? Wrong. The NHS website tells us, "Although it contributes towards your recommended daily intake of fruit and veg, a single shot of wheatgrass doesn't count as one of your 5 A DAY. Wheatgrass is packed full of protein and chlorophyll though, so add it to your smoothies and juices for a snack packed full of nutrition.

Blended into smoothies or sprinkled onto porridge, chia seeds are rich in omega 3 fatty acids. Weight for weight they also have eight times more omega 3 than salmon.  Unfortunately there's 3 different kinds of omega 3 ; DHA, EPA and ALA and chia seeds don't contain any DHA (the stuff that helps maintain a healthy brain, skin and eyes). Also, who could really eat a salmon sized portion of chia seeds on regular basis? Stick to salmon and save your chia seeds for your smoothies.

"Superfoods" are generally high in nutritional value and great for you - so eat them if you want. However research on their so called super powers is scant, so there's no need to unnecessarily splash out - you can get just as good benefits from a varied and nutritional diet of everyday fruit, veg and grains. So the takeaway -  be wary of being pulled into a companies advertising influence, do your research or better still, just ask us to research for you!