Which Non-Milk Is The Best Milk? 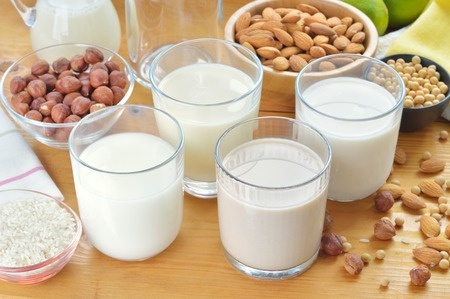 With the increasing rise of non-dairy milks on the market we've decided to do our own test into which non-milk, milk is the best.

For those of us out there with a lactose intolerance or an allergy, going dairy free is more a neccesity than a lifestyle choice. However, there's an increasing number of people choosing to reduce their dairy intake in order to see health benefits such as improving digestion and helping clear up problem skin.

What are the options?

Walk into your local supermarket and you'll find a wide variety of dairy-free milk options. For the purpose of this taste test, we're going to be focusing on; almond milk, soya milk, rice milk and coconut milk.

How are we testing it?

We're going to be testing each variety of dairy-free milk by using it instead of cows milk in coffee, tea and porridge or cereal. We'll be judging based on taste and checking out the facts as to which varieties deliver the best nutritional punch and benefits. Obviously taste is a very subjective thing, so we've got a few members of the team to taste test!

We thought this was really pleasant in coffee with a subtle coconut taste. Slightly sweet, but still fine if you don't enjoy sugar in your coffee. However, when it came to tea this was a no-go. It requires so much milk in order to get a decent colour that it tastes overwhelmingly of coconut and loses all taste of tea. Pretty good in cereal if you don't use too much.

As you'd imagine, almond milk has a nutty taste which we think tastes great in porridge. We thought it also works well in coffee and tea (it makes tea look a lot darker than usual but doesn't need as much as coconut to get a good colour).

Bit of a mixed bag for soya, in tea it's not too bad. It gives a good consistency closest to that of milk that doesn't lose the taste of tea but has a very subtle hint of vanilla to it. However it has a slightly tangy after taste which we weren't too keen on. We also didn't think it tasted great in cereal or porridge.

This is really watery and doesn't taste of well...anything really. Out of all the non-dairy milks this was our least favourite in tea, coffee and porridge/cereal. It also separated a bit when added to tea which put us off a bit!

For us the winner was almond milk as we felt it tasted pretty good consistently across tea, coffee, porridge and cereal. In terms of what tastes most like milk, it would have to be soya. What's your favourite non-dairy milk? Let us know in the comments!