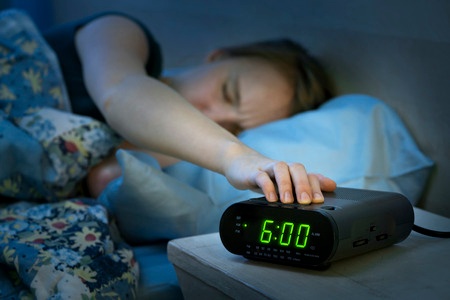 You know the feeling – you’ve struggled for hours to get to sleep and the moment you finally drop off, it seems your alarm starts beeping relentlessly.

You’re exhausted. Surely it would be better to give yourself a lie in and skip that morning workout you had planned? Listen to your body? Well actually science says no – when you’re at your most tired is exactly the time you should exercise - in order to ensure you don't over-eat to combat your feelings of tiredness.

In a new study, published in the journal Psychoneuroendocrinology, researchers invited healthy participants of a normal-weight range to a sleep laboratory on two separate occasions to be studied after three consecutive nights of normal sleep, and after three nights of sleeping for just four hours a night. Participants had their blood drawn repeatedly to assess endocannabinoid levels (a group of neuromodulatory lipids and their receptors in the brain that are involved in a variety of physiological processes including appetite, pain-sensation, mood, and memory) in blood. On the last day the blood was taken both before and after a short bout of high intensity exercise.

The researchers found that the levels of 2-arachidonoylglycerol -- the most abundant endocannabinoid in the brain -- was about 80 percent higher after the nights of short sleep compared with after the normal sleep session. When the participants exercised, the levels of 2AG still went up almost by half, regardless of whether participants had been allowed to sleep for three normal nights, or to only sleep four hours each night.

This study suggests that even if you suffer from a chronic lack of sleep, you can combat the effects of this with exercise - so next time you're feeling tired and lethargic (as long as you haven't done anything crazy like ran a marathon the day before) - go and exercise!