Team MoveGB's most Embarrassing Workout Confessions that are just too REAL

For anyone who has ever faced the crippling anxiety of joining a new gym, class or activity with worries of spectacularly embarassing yourself, then read this. And anyone who just wants a good chuckle, read on as well!

Team MoveGB have all been there, done that and would get the t-shirt if they could. Boy, some of us have had it pretty rough when it comes to workout fails, but no matter how red we've blushed, we've still gone and hit that workout again. See how we've recovered from our workout horror stories below - if we can do it, you can too!

"No matter how hard you fail,

just pick yourself up,and do it all again."

"Once I was out for a run and was pretty sure I had reached the end of my life about halfway though my route. I was bent double, getting my breath back and just generally dying, when a car pulled over to see if I was OK. I had to explain to a very worried lady that I was simply out for a run and was very unfit....

... but hey, everyone has to start somewhere! I was doing the 'Couch to 5km', which is a gradual introduction to long-distance running using interval training. Before the challenge, I couldn't run much at all, but by the end I smashed the 5km without concerning any passing motorists. Such progress!"

"Everyone has to start somewhere!"

"I accidentally doubled my weights on the bench press without realising, which found me being strangled by the heavy bar. I was trapped with it on my neck until a good samaritan helped me to freedom... I sure learnt my lesson there!

... but despite my embarrassment, I perservered with the bench press and can now actually lift the weight that I failed to do so during 'the incident'! I'm so glad that it didn't stop me."

"despite my embarrassment, I perservered..."

"I was once in a yoga class, stretching, bending, doing my thing, namaste.... and then I did a shoulder stand aka Sarvangasana. It was the first time I had actually nailed this position, but then the biggest yoga fear happened: I farted in a silent studio. And to make matters worse, I squeaked and crashed down with surprise....

.... but that hasn't stopped me from hitting the yoga mat! Sure, I don't really do Sarvangasana in public anymore as I've discovered that it's not a safe position for me, my dignity and everyone else in the studio, but I still love my classes and there are plenty of other positions I can improve on!"

"One little parp isn't going to stop me!"

"A few years ago I walked into the gym, planted my bag by the squat rack and wandered around doing those "I'm going to lift loads today" arm flaps. I got on the rack and decided to do a warm-up set with no weight on the bar. Simple, eh?

On my first squat: BAM!! The sound of my shorts ripping right up the back tore through the air. It was heard, and then seen, by everyone. Needless to say, I didn't stay long in the gym that day...

... the thought of returning to the gym was shrouded in pure embarrassment, but when I next returned, with brand new shorts, I was SO happy to see that it was yesterday's news. No one gave me a second glance, no one was pointing, no one was laughing - it was already forgotten, so I just hit the weights again and life went on."

"No one gave me a second glance"

The one and only time I went to a Core Stability class, we had to balance on the stability ball with our feet against the wall whilst doing sit-ups. I sat in the wrong position which caused the ball to shoot our from under me, across the room, and I fell on my arse. I then had to get up in front of everyone to retrieve my ball....

... OK so I didn't go back to the class, but I had discovered that I prefer balancing a bar, rather than balancing on a ball! I gave Core Stability a bash, it gave me a fab story to tell my friends, but Body Pump is the class for me!"

We at Team MoveGB have been through the mill quite a bit - other stories include breaking toes from dropping weights, falling off treadmills and lunging accidents... although we've gone through agonizing humiliation, we've still dusted ourselves off and kept going.

We're all human, accidents happen, mistakes can get us in the neck, but move on and (literally) get stronger! It will quickly be forgotten by any witnesses and you can continue on your fitness journey, with a few brilliant fitness-fail stories under your belt. 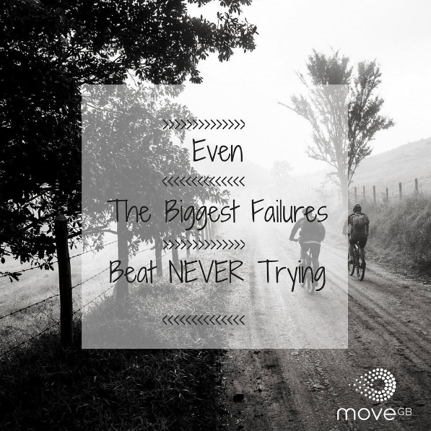 Think you've got a more embarassing workout confession? Let us know in the comments below!