5 Things I learnt from BodyPump classes

Have you ever seen BodyPump classes on your local gym or leisure centre’s timetable, and wondered what the heck it is? It can sound a bit intense... but after regularly attending BodyPump for the past 4 months, I’m here to bring you the lowdown on what it’s all about. And what it’s taught me about fitness.

Before I was persuaded to hit up my first class by a colleague, I thought it was a class aimed at those who wanted to endure pain, heavy weights and… pump their bodies. Yep, I had no idea really what I was getting myself into. But with a MoveGB membership, I didn’t have to phaff around too much with getting myself booked it. I searched on the app for the nearest class to my office, found it, booked it. Bosh.

But before I delve into what I learnt from BodyPump classes, let me first tell you what the heck it is and who thought this classic class up.

BodyPump was thought up and developed by Les Mills in the 90’s. It’s designed to shape and tone your entire body, increase core strength and improve bone health using light weights. Instructors take you through sequences that target different parts of the body using weights or bodyweight throughout a song track.

These routines remain the same for 6 - 8 weeks of classes, which allows you to amp up your weights as your body gets used to the movements… and gets stronger. Classes range from 30 mins to 55 mins and you can burn up to 540 calories per session.

It sounds like an intense workout, but I liked the sound of ‘light weights’ being used. Ultimately, sometimes you just gotta throw caution to the wind and dive straight into a new fitness activity without overthinking too much. YOLO.

5 Things I learnt from BodyPump classes

I tentatively walked into the studio at my local YMCA in my usual gym gear, bottle of water and small towel - ready for the inevitable SWEAT. I followed what my work mate was doing: laid out a step, a mat, a bar and clips to keep the weights on the bar. I collected a variety of different coloured weights - I was told to stay light for my first class, so I stuck to the yellow (1.25kg)  and green (2.5kg) weights. They felt light, so I felt confident that I’d be ok. Just take things easy for my first session… right?

But then the instructor walked in with his headset on, and the tunes started pumping….

Those light weights might feel super light in your hands at the start, but while you’re trying to keep up with strange new sequences and moves, you don’t want to combine that with heavy weights. Spend your first couple of sessions on the lighter end of the weight scale according to your strength - learn the moves and focus on getting the correct form. Even though they may feel light, after 1,000,000 chest presses, they’re not going to feel so feather-like. 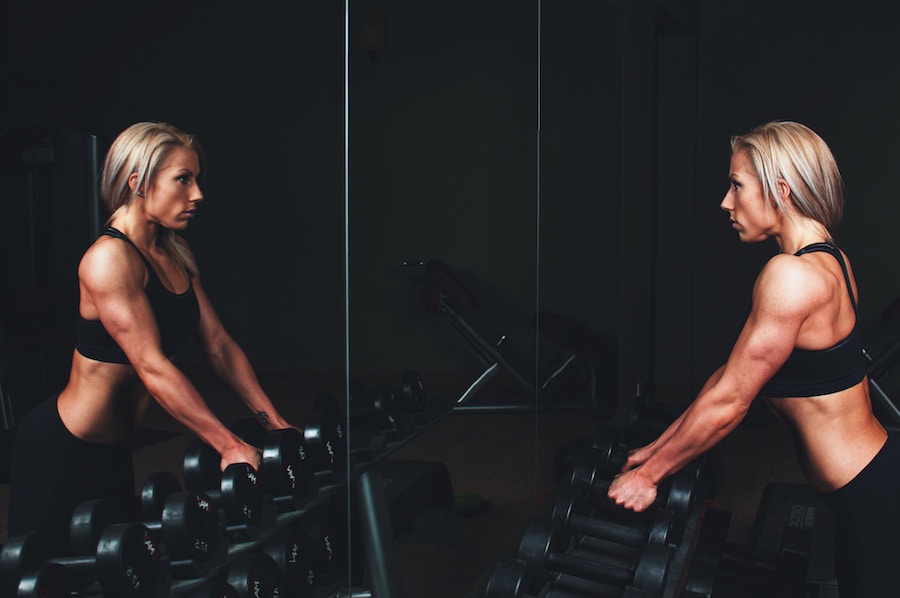 2. Lifting weights will NOT make you bulky!

I had a pretty naive preconception that lifting weights for 45 minutes straight would make my muscles explode into huge bulbous Popeye biceps with throbbing veins. What a fool I was.

Sure, you do have weights in your hands or over your shoulders for the majority of the class, but the weight lifting focuses on the ‘Rep Effect’ - a formula that exhausts muscles using light weights, while performing high repetitions which develops lean, athletic muscle.

If you wanted to bulk up and have large defined muscles, it would take far more training than a BodyPump class, and your diet would have to be honed to support your goals.

BodyPump is resistance training with weights at its finest - it’s a great way to burn calories and build muscle. Improving your muscles ultimately increases your metabolism, and can help you continue burning calories long after the class has finished.

3. Lifting weights will make you STRONG

Ok this isn’t exactly a newsflash - we all know that the more you lift and workout, the stronger you’ll get. But for someone who never really knew what they were doing in the weights section at the gym, this transformed my mindset and approach to weights.

I never put in that much time and effort with weights, but having a dedicated 45 mins of BodyPump per week, I saw noticeable definition begin and an increase in strength. Especially when it came to going to my usual bootcamp or other fitness classes - I was able to push myself a little bit further now I had BodyPump in my week.

Keeping up to a song track with a significant amount of reps keeps me focused, and before I know it, my legs are trembling from the squats but the song is over. And we’re moving onto a new body part. The class pushes you, but you know you only have to get through one song. You’ll see how far you can come over the 6 weeks of the routine - you may have even quadrupled the weights you used when you first began the routine!

4. Your form is so important

When performing deadlifts, chest presses, squats, press ups, crunches - the form is oh so important. This is another reason to start your BodyPump classes with relatively light weights so you can focus on getting the right form and keeping up with the instructor. Ease your way into the way of BodyPump life.

If you don’t engage your core by pulling in your belly button and tucking in your tailbone, you could be putting strain on your lower back which could lead to injury. I’ve overdone it once or twice before, and felt twinges in my lower back which I haven’t been a fan of. Be really conscious of your form throughout the class - even though they’re fast-paced, be sure to keep it strong. This will also tighten your core and help tone your tummy!

If there’s a move which you find uncomfortable, feel free to modify it. When we do the abs section of the class, I get neck strain if I don’t support my neck with my hands. So I ditch the weights for that one and just focus on crunching as hard as I can and keeping up with the beat.

5. Using weights can also be cardio

I never thought that pumping iron could also be a cardio workout, but during a BodyPump class you really get the heart pumping and get out of breath!

I’m not a fan of cardio - I suck at it. I look like Phoebe from Friends when running in the great outdoors and my stamina on a treadmill is similar to a snail. Cardio fills me with dread. The secret to getting me doing cardio is to fool me. So imagine my surprise to find out that BodyPump is classed as a cardio strength class!

During one song (usually edited to last about 5 minutes), you’re doing dozens of reps. These classes have powerful squat sections, intense upper arm workouts, and killer ab sequences which get you puffed out, your heart racing and your muscles burning. I can feel such a difference to my fitness from integrating this weights class into my week - I feel stronger all round.

So there are a few surprising things I learnt from going to BodyPump classes - ultimately, it’s transformed my view on using weights to keep fit, made me more conscious of good form and also made me realise how group fitness is actually pretty damn motivating. There’s now a group of us at work who never miss our lunchtime BodyPump session. We rally each other to getting our butts into class and it’s always helpful to have a mate next to you so you can grimace at when things get pretty sweaty!

And one last thing I’ve learnt from BodyPump: when you’re getting toned, you look at the the scales less. Muscle is denser than fat. So if I’m heavier, I don’t care. As long as I’m feeling strong and toned, eating well and hitting my workouts with everything I’ve got, then the scales can go stuff themselves.